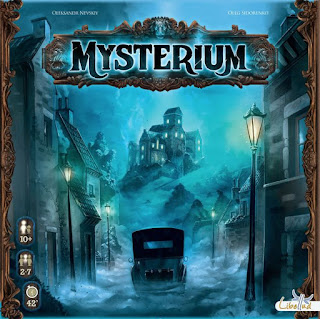 Continuing our adventures into the world of Cooperative gaming the next game I introduced to my fledgling group of non-gamers was Mysterium. Mysterium takes the game of Clue and replaces the concept of logic and reasoning with an obtuse ghost, through which your group of mediums is attempting to deduce the ghosts killer.

Rather than simply explain it was the Reverend Green, with the Candlestick in the Dining Room, the ghost will first tell you it’s entire life story, including every character he met along the way before his untimely demise. Finally, from this rogues gallery you must choose who you think was the killer based on yet more interpretive dreams given to you by the world's worst eye witness… seriously, it’s like he doesn’t even want you to catch his killer!


Mysterium is a Co-operative Game. One player plays the murder victim, they are a ghost and it is their job to give out visions to the other players to guide them towards the murderer, the location of the murder and of course the murder weapon. The Ghost Player has a screen in front of them showing which murderer/location/weapon belongs to each player. Each round the Ghost Player will give a vision to each player. To do this they choose one or more cards from their hand and give them to a player, drawing back up and repeating this process until each player has a vision. 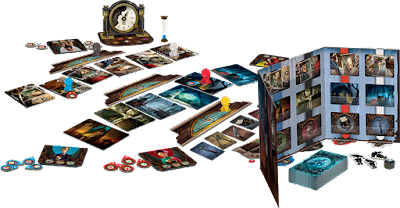 Some clues might be easy. For example, the Ghost wants a player to guess the gardener so he gives him a vision card depicting a idyllic garden scene. However, Bob can’t put two and two together and come up with gardener, no Bob has logic that is different to our earth logic and Bob decides the bushes in the garden scene look like basil, so he decides his murderer must be the cook! Fortunately the Ghost cannot speak during the game so Bob is mercifully spared from a tirade of profanity about what a klutz he is.

Once each player has a vision he must choose a card he thinks corresponds to his vision. Multiple players may choose the same card if they wish. They also may place bets on whether they think the other players are correct. If they win their bet they proceed up the precognition track which will help them during the final round of the game.

If a player correctly guesses their card based on the vision from the ghost they move to the next stage, from murderer, to room, to weapon. If they don’t they remain where they are. A new round begins with another set of visions and play continues in this fashion until all players have correctly guessed their three cards or until 7 rounds is up. If the players succeed in getting all their cards correct there is a final round, where the players must, as a group, correctly guess which set of cards actually corresponds to the murder based on a final set of visions given by the ghost player.

It’s Like Dixit, If Dixit Were a Proper Game


Mysterium is an evolution of games like Apples to Apples or Dixit. However, unlike it’s party game brethren, Mysterium is a gamers game. As the Ghost player you must attempt to give the best clues you can from what is generally a collection of complete nonsense. And herein lies one of the problems with Mysterium.


I used the word obtuse to describe the ghost during my opening preamble and I think that was being generous. This Ghost is simply insane, the visions he hands out include things like tiny mice knights riding into battle, or a chimney sweep on a flying penny farthing and from that clue you’re supposed to guess Bedroom! As such the Ghost Player has a really hard time of it and really should be someone who has played the game before. 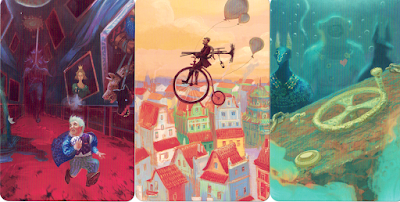 
The second problem the Ghost Player has is the sheer number of cards. If you play on easy mode then there is just one more card than the number of players, however if you play on medium or hard mode then get ready for a seriously large selection of murderers, rooms and weapons. Even on easy mode there will be at least one card on the table that is not behind the Ghost’s screen. This means that when the Ghost Player is giving clues they aren’t even considering whether or not their clues could be leading you down the wrong path.

During one game of Mysterium Brian had continuously gotten his room wrong until Mrs Bob pointed out that there was an insect in each of the visions and that the staircase was lined with framed butterflies. Amazing we cried, what a brilliant piece of detective work. The next vision came out and sure enough there was a bee on it! Confidently Brian declared, it’s the stairwell and low and behold we were completely wrong! You see the Ghost player couldn’t see that stairwell or it’s beautiful collection of butterflies and had no idea we were being lead down the garden path!


The final problem with Mysterium is frustration. The ghost’s inability to talk can make that role very frustrating as you watch players miss the obvious clues you had so carefully laid out. Mysterium is not unique in this sense, but it is definitely something you should be wary of with new players.

So Why Choose It?


It sounds like I have a lot of problems with Mysterium so why did I subject my non-gamer group to it. Well, firstly, I would like to point out that I do actually like the game and think that some of the negatives I pointed out above are actually also positives. Secondly I decided to play Mysterium partly because it’s simple, partly because it’s incredibly beautiful and partly because I wanted to try it out. At the time Mysterium was the new hotness and my copy was literally burning a hole in my gaming shelf, just aching to be played.

I have still not learnt that just because I want to play something doesn’t necessarily mean I should bring it to games night, but more on that later.


I think there is a mixed feeling in the group towards the game. Certainly we’ve played it three times, twice in the same night, but I have also heard lots of complaints about the difficulty of being the ghost player and the ridiculousness of the visions.

For me I enjoyed it and I will keep it open as an option during future game nights but I’d prefer to let others request it than force it on them.


So, is Mysterium a good gateway game? I want to say yes. The similarity to Cluedo and party games like Dixit makes the game accessible. The fact that the game is fully co-operative means that players win or lose together, making the obtuse ghost, merely a victim of circumstance, rather than a roadblock on the path to victory. The rules are simple and easy to understand and the production quality is outstanding.

However, in my group the game has definitely been met with a mixed reception. One player would much prefer to play Deception: Murder in Hong Kong over Mysterium, saying, “It’s the same game but without the stupid ghost”.

By this point in the review I’m supposed to have come to a conclusion but I’m stumped, in many ways I would say you should buy this game but maybe you should try before you buy. I think, in reality, the success you will find with Mysterium will vary greatly depending on the group. Still, it’s one I plan to keep and hope to see it on the table again soon, after all, it is VERY pretty!